7 Pitch Perfect Things That Happened to Felicia Minor in 2014

When you start a new year, in this case 2014, you start with a “clean slate” and often set resolutions that you are going to be a better person than you were last year. In this case, I told myself if I hadn’t achieved the success that I wanted in my drag career by the time I hit 30, I was going to let it go, turn off the spotlight and fade into the darkness.

Turns out that the goddesses and spiritual beings heard this and were determined to keep me in the spotlight. Some of it was what I wanted, planned and some of it just seemed to happen — and worked out in my favor. I consider myself blessed and overwhelmed by the “pitch perfect” things that happened in 2014.

For some reason or another, I was picturing that my friends and family would be jumping out of their skin to celebrate my 30th birthday with me. As the weeks got closer and 29 was becoming a distant memory, it seemed that no one had plans or wanted to hang out that birthday weekend. It wasn’t until after the weekend was over and I had to recover, I had surrounded myself with my friends, family, fans and community. 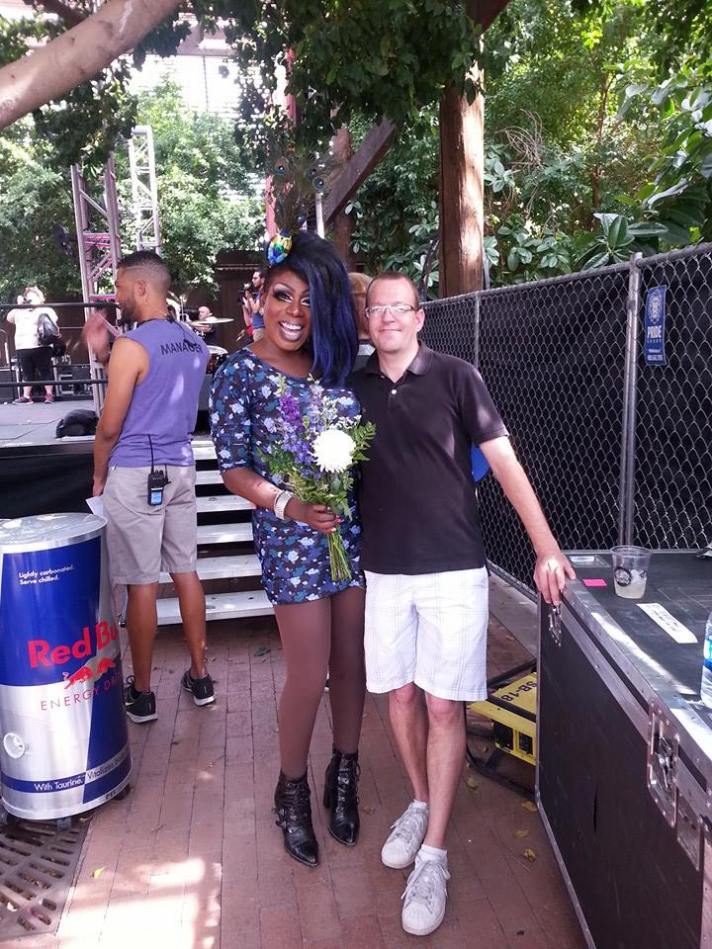 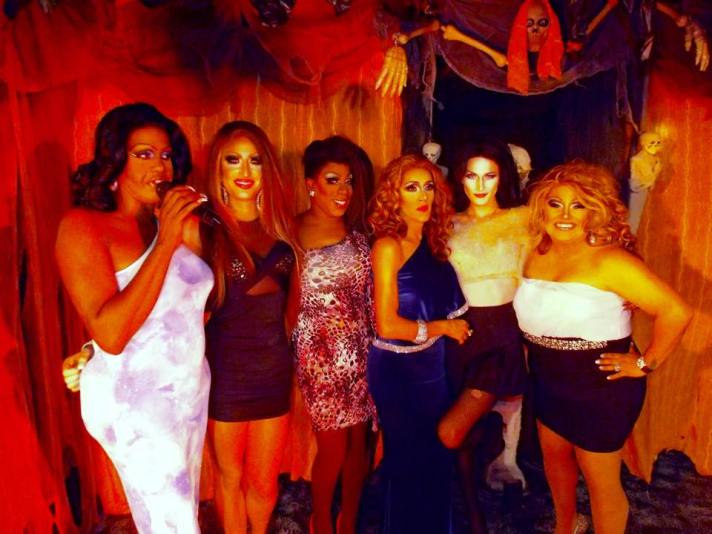 I did a couple shows that weekend, Spotlight and Saturday Night Madness. I also performed at Phoenix Pride’s Rainbow Fest and even got married there. When I look back it was more than I had imagined or could have asked for.

From the first time that I saw Freddy and the cast of Spotlight perform at Rainbow Cactus, I had this excitement as an audience member to want to see more. The energy of the entertainers was refreshing and the variety was so beyond the shows that I had seen or been in. Again, once they moved to Zoan in the Melrose District of Phoenix, I went to go see them and got the same feeling of excitement. One day, Freddy invited me to be a special guest and I fell even deeper in love with the atmosphere that the entertainers created, I felt energized.

Then in Dec. 2013, I was asked to be a cast member of the already award-winning show and, of course, I said yes! I have been rehearsal and learned my right foot from my left. The themes, even one where I was the brainchild — Freak Show,  are fun and keep things going and have audience wanting more and guessing what’s next. I will be in the Stage & Screen – The Sequel show on January 30. Though Freddy’s taking a break, I’ve told him over and over, I can’t wait for the show to get up and running again. I’ve enjoyed it and grown from the experience.

It took me a hot minute to say that I wanted to jump back into the pageantry game. Some parts of me had not fully wanted to join in the Entertainer of the Year contest. It took so convincing not just from other people, but my husband. I wanted to make sure that he was okay with the time I was putting in. I wanted him to be a part of the process this time. It was going to be different than when I was a titleholder in 2011.

Unfortunately, but fortunately, I was second alternate to Miss Arizona Entertainer of the Year and was able to go to Nationals despite my freeze up and fumble performance that can be seen on YouTube. (And no, I won’t give you the direct link… ha ha). We even formed Team SWAZ and were featured in ION Arizona Magazine.

I travelled and learned about myself, gained a sisterhood between Karime Lizaldi and other EOY family. Karime even made top ten and I was just proud of being where I was, being able to perform on a National stage with the support pouring in from Arizona and other parts of the country.

Just before I went to Nationals, I was asked if it was okay to be placed on a Billboard for SafeOUT, ran by LGBT Consortium in Phoenix. I said yes and was excited about it and didn’t tell anyone about it cause I didn’t know when it was going to go up or if it was going to go up. While we were at Nationals, the billboard went up in the Melrose district in between Stacy’s on Melrose and Zoan. Again, I was overwhelmed with love and support on social media. It was pretty awesome. I can’t say that I’ve never been larger than life. 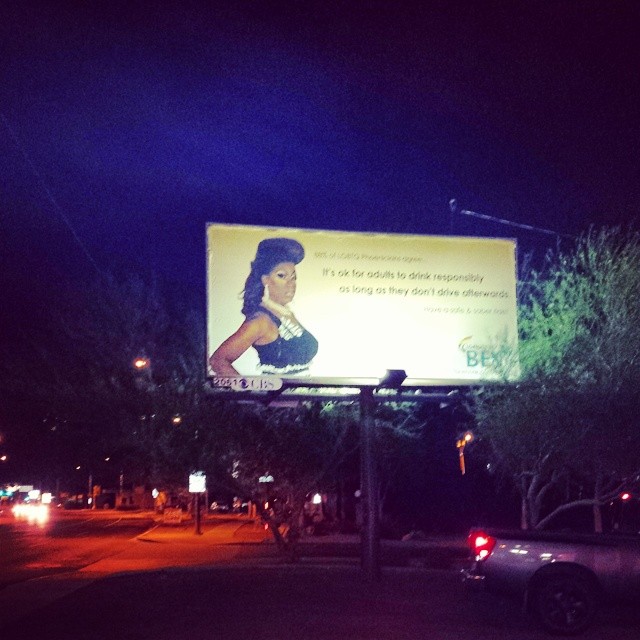 There was write up on it in local media including ECHO Magazine. I am glad I could be the poster diva for a great organization.

I’ve hosted events before but not on the scale that the annual Casa Grande March for Equality. We travelled to the southern central city of Casa Grande to be a part and host the city-historical event that was founded by folks like Christopher Jay Hall and others. I had participated in the event in the past five years but not hosted, just performing. We had so much fun. Talking with entertainers from all over the state and such.

During the hours of hosting the event, I convinced a young girl, Dai, to give up her dress if I bought some AVON from her mom. Indeed I bought AVON from her mother. The young lady later sent me a note on Facebook and would like her dress back. I am working on getting some Fefe shirts made and will send her dress back to the Casa Grande-ian.

Two years ago, I had this idea to reach out to my fans and followers in a different way and I wanted to approach it in a way like Oprah, Ellen and still bring out my personality. Definitely wanted to talk about different subjects — sex/health advice, entertainment news and so much more. I am so lucky that award-winning and nationally recognized drag king and personality Freddy Prinze Charming happily joined the journey with me on Wed., Dec. 19, 2012. I had no idea what I was doing but it was a great dip and definitely something different. 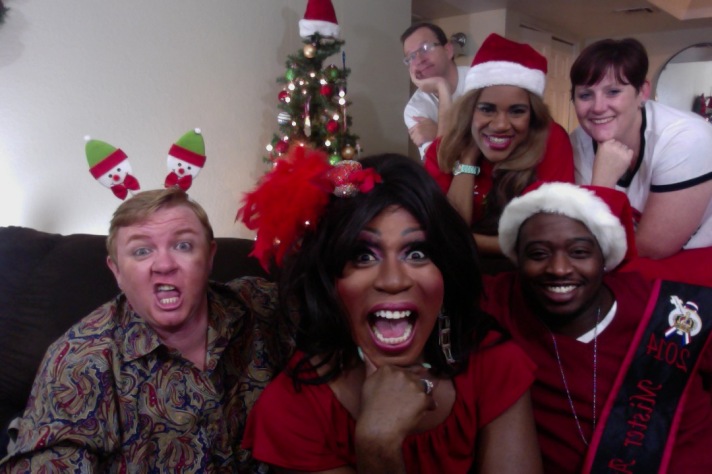 We have interviewed some queens & pit crew from RuPaul’s Drag Race (Phi Phi O’Hara, Jiggly Caliente, Jason J. Cater), some musicians, fellow YouTubers and reaching out to now a nationwide audience with 70-100 viewers per episode.

This year was one of the first years that I had participating partners like Gabe King Photography and Phoenix Movie Bears. Phoenix Movie Bears helping us getting some content going on our website and Joshua Hastings, one of the founders of PMB, keeping me in check with the latest and great site updates. The Phoenix Movie Bears have helped us in getting to be in the on the latest movies and even taking it back and reviewing some of the older movies (flashback!). We have been to quite a few movie screenings and enjoyed some movies (Mandela, BoxTrolls). Gabe King Photography has been great on being able to take Season 3 photos. They look fantastic! Gabe King, the photographer behind the camera of GKP, has been create with some of the creative theme that we wanted to go with. I can’t also forget the peeps that support our show as well: WhiteyTighties.com and LawTruck.com.

Arizona Legalizes Same-Sex Marriage & We Walk Down the Aisle

In a series of events that happened the weekend before my birthday in October, Arizona legalized same-sex marriage statewide. There was such a joyous feel to the weekend and it was mainly because were just walking in the right direction of Marriage Equality or appropriately hashtagged on Twitter — #MarriageMovement.

In the midst of the excitement, the Phoenix Pride’s Rainbow Fest was being held that weekend and doing impromptu weddings in the courtyard of the festival. There I was dressed in the drags and my husband says to me that we are getting married today. Being the prankster he is, I thought that he was joking and signed us up. This would be the second time I would have been married to the same man. I almost consider it a renewal of our vows because we had been married before in California in 2006.

It was such a great feeling and a wonderful feeling indeed being married to my best friend again.

Again, wow! 2014 kept coming with great things and great surprises. One afternoon I got an email from the managing editor of Echo Magazine, Kara J. Philip and it was asking I would accept to be an inductee in Echo Magazine’s Hall of Fame, Class of 2014. I’ve won pageants before and this struck me differently. This was deep and personal for me. I was overwhelmed and overjoyed, almost teary eyed. You can read the full interview here: http://echomag.com/felicia-minor/ 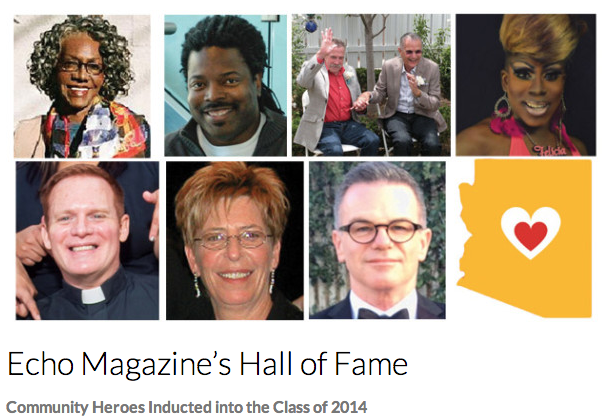 The sense of being overwhelmed with joy didn’t just come from being in the hall of fame. It was that my community thought of me as a symbol of excellence and that I was in a class of inductees that I follow and look up to.  In the interview, we discussed my life and such. It pretty much made my year. And with this being published in late October, I decided to keep the spotlight on.

With all that went on this year, I have, again, decided to keep the spotlight on. I am not sure what is next, but when it comes — I will be sure to let you all know. I am look forward to enjoying myself and working toward other great ideas. I hope that you have enjoyed your year and gotten to the places you wanted to get to. If not, just work hard get to where you want to be.