It has definitely been a busy week for me. Trying to get over a cold and keep going all at the same time can sometime be a bit overwhelming. And… I know doesn’t give me a chance to re-coop or give my body a chance rest. But you know me, I have to keep going.

Monday, I did stay home and watch RuPaul‘s Drag Race: Reunited, the Ru-Union! It was funny and made you think of how they felt while being on the show for up to 12 weeks. That’s the madness! I didn’t agree with some of the points that were made but I can say one of the boogers was NOT sickenin’! Can I get an amen?

Tuesday, it was great to participate in the Stars of Tomorrow and the best part was that I keep trying something new but the CDs were skipping. It was still a great time! I will not be participating in the show this next week because I am going to a round table discussion at the East Valley 1’n’10 center. Meeting with the children and letting them ask me some questions. It’s definitely going to be a great time! 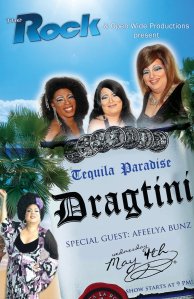 Wednesday, we had Dragtini: Tequila Paradise with special guests Afeelya Bunz and Barbie Bratz! It was so great to see such a great crowd and see that our show has grown on so many different levels. Afeelya was great to have in the show with such great comedic timing and reference. She was just as funny or if not funnier back stage. She has magnets that she is selling as a fundraiser for her trip to Nationals in October. She even offered to help me with fundraising in the near future to help me get to Nationals in July! Awesome.

Barbie Bratz, she is always creative and great to have around. She is so nice and puts her heart into her performances. She is great!  Also during Dragtini, we raffled off tickets to Bruno Mars and Ke$ha! Congrats
to Katie & Alyssa for winning the tickets and helping me get to Nationals on step at a time! We also did FREE tequila shots at midnight to bring in Cinco de Mayo! It was a great night that ended at Jenny’s or the Gay Denny’s. 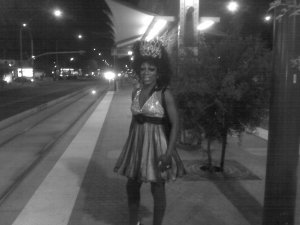 On Friday, I rode the Valley Metro and the light rail to the First Friday event to let people know about our shows at the Rock. It was a great time and I took lots of pictures. I felt like a black Barbie doll. 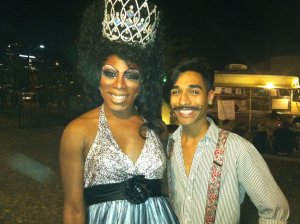 Thank you for your love and support throughout the week and I hope to continue to take it to the next level! Supernova!